Zinc oxide (ZnO) is a promising electrode material for optoelectronic applications such as excitonic solar cells or organic LEDs. This is due to its transparency to visible light, n-type conductivity, the possibility of creating metallic surface layers by exposure to hydrogen, and not least its abundance. Notably, a deep understanding of its highly complex surface properties and the associated surface charge carrier dynamics has not been achieved yet. We study the ultrafast quasiparticle dynamics in and below the ZnO conduction band using femtosecond time-resolved two-photon photoelectron spectroscopy (2PPE) Above band gap excitation causes hot electron relaxation by electron-phonon scattering down to the bulk conduction band minimum on a 20 to 40 femtosecond timescale. This relaxation process is followed by the ultrafast (200 fs) formation of a surface exciton (SX), which is observed as an increase in 2PPE signal below the Fermi energy EF. The SX exhibits a remarkable stability, showing lifetimes of several hundreds of picoseconds, most probably due to the lack of unoccupied final states for the electron below EF. Tuning the excitation density, i. e., the laser light intensity across the Mott limit, the SX formation probability is reduced due to transient screening of the Coulomb interaction in the regime of high electron-hole density. Remarkably, even strong modification of the surface charge density by hydrogen termination does not change the population dynamics of the SX, showing that the exciton is localized in the subsurface region. Thus, its longevity and insensitivity with respect to surface termination make the SX highly relevant for applications involving excitonic interfacial energy transfer such as Förster resonance energy transfer (FRET). 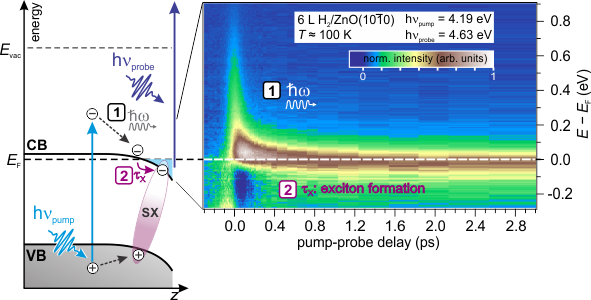 Schematic view of hot carrier relaxation and exciton formation at the ZnO(1010) surface (left). Pump-induced time- and energy-dependent photoelectron signal (right). Strong downward band-bending at the very surface leads to the formation of a charge accumulation layer (few nm thick). Above band gap excitation launches ultrafast electron relaxation via LO phonon scattering (1). Coulomb interaction between electron and hole results in formation of surface exciton (SX, 2) on a timescale of 200 fs. Consequently, additional states below EF are created, which manifests itself as additional photoelectrons with energy below EF.